Richard Clayderman about „Ballade pour Adeline“, his approach to music and his personal feelings about interpretations

Richard Clayderman, born Robert Louis Philippe Pagès in 1953, is one of the most famous musicians and pianists of our time. The name „Clayderman“ is a stage name and refers to his Scandinavian roots. He started his career at a time when disco was the predominant music style and began as a bar pianist and background musician for variety artists. Taught at a very early age by his father, himself an accordion and piano player, he was admitted to the conservatory in Paris when he was 12. In 1977 he recorded „Ballade pour Adeline“, composed by a friend of his producer Olivier Toussaint. The song was an unexpected and instant success, becoming a huge hit at a time when disco music was in fashion (the same year as „Saturday Night Fever“). Richard Clayderman’s records and CDs have sold 120 million copies to date. In his interview with Christian Dueblin, Richard Clayderman talks about his approach to music, his personal feelings about „Ballade pour Adeline“, his music and interpretations which have withstood every music fashion, his partnership with Olivier Toussaint and about comments made by other great musical personalities in their interviews with Xecutives.net.

Dueblin: Your father was a pianist and you were admitted to the conservatory at the early age of 12. How did your father and mother influence your music and your personality?

Richard Clayderman: My father was first and foremost an accordion player, but naturally he also played the piano. Since there was a piano in the house that my father used for giving piano lessons and music theory, a piano was always a part of the furnishings in the apartment where we, my parents, my sister and I, lived in Romainville, a suburb of Paris.

The piano with its impeccable rows of white and black keys spaced at regular intervals called out to me… attracted me… My parents very cleverly made it easy for me to learn to play the piano, without pushing me. My piano practice was never executed under unbearable pressure, but my parents organized my life around the piano and taught me to respect the time that I had to devote to it. They knew that they sometimes had to ask me to stop playing football with my friends in order to practice at the piano. I obeyed and I knew that they were acting for my own good and I am grateful to them to this day for it.

Dueblin: Your musical journey reminds me of Jon Lord (Keyboarder / Founder of „Deep Purple“ and connoisseur of classical music), who recently passed away. He told me of his early years working with musicians. He could barely pay the rent but he was very demanding when it came to his goals and his vision of music. In the end he sold over 200 million records and CDs with the group „Deep Purple“.

Richard Clayderman: In school I wasn’t particularly brilliant. I did not have a knack for mathematics nor physics nor anything else and my parents hoped that music, especially piano playing, would make it possible for me to earn a living. We had one ambition and hope that one day I would become a background musician. At first I was an organist in a pop band before I became a background musician for variety artists. 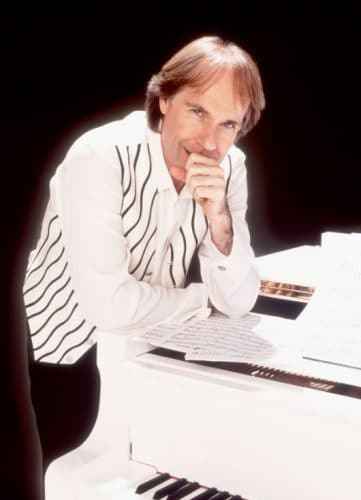 Dueblin: What expectations did you have when you were very young and playing the piano? What, in your opinion, were the most important steps and conditions that made your success possible?

Richard Clayderman: I had no other ambition than to play the piano as best as I could, but a solo career was never a part of my dreams, nor one of my goals. It was fate that I was chosen by Olivier Toussaint to play „Ballade pour Adeline“. At the time no one thought, not him, not me, not anyone, that I would make a career like I have done for the last 35 years. What happened to me was neither calculated nor planned.

Dueblin: „Ballade pour Adeline“, today one of the most popular pieces of modern music, was composed by Paul de Senneville for his daughter. What are your feelings towards this piece that you have played thousands of times? Do you have a special relationship to this song? And what is Adeline like?

Richard Clayderman: Neither Paul de Senneville nor I could have imagined that „Ballade pour Adeline“ would open doors for me to a career that no one could have imagined nor dreamed. In these 150 seconds of music there is something clear and evident that makes the piece timeless and possibly eternal. Today Adeline is just under 40 years old and she and I took part in a TV show in Germany: people wanted to get to know her better and some even wanted to discover her.

Dueblin: You are a fan and a connaisseur of jazz, but you don’t play jazz. What do you like about that style of music?

Richard Clayderman: For over 20 years I have been listening to a lot of jazz. I admire the performers of this music genre, which is so different from what I do. I love their virtuosity, their ability to improvise and in many cases, their humility. In my concerts, I can’t resist playing a jazz number. In the last few years I have often played „Looking up“ by Michel Petrucciani and I think that the audience is happy to hear this lovely composition.

Dueblin: The world of music and music styles has changed dramatically, but some of your melodies and interpretations have withstood every fashion. It is possible that your music will still be played in 50 years while others will be long forgotten. How do you explain this?

Richard Clayderman: If you listen to most of the recordings that I have done since my debut 35 years ago, you will notice that the melodic themes in them are essential. For it is the melody that remains and lives on. I think the melodies in several of my recordings have a good chance of remaining popular for some years after my death.

Dueblin: Like all famous people, you arouse envy and you have had to face criticism of your music. Before your music became successful, did you take this criticism personally?

Richard Clayderman: It is true that I was the object of harsh criticism in France and I am sad about that. However, in Asia, Latin America, and Australia I never had to deal with such criticism. That is a lovely reward and perhaps someday I will be more appreciated in my own country.

Dueblin: You have been working with the same producer, Olivier Toussaint (Delphine Records), for 30 years but also with Hervé Roy and Gerard Salesses, both great musicians and composers. This long collaboration, especially Olivier Toussaint, can be seen as a key to your success. How would you describe your relationship to your producer?

Richard Clayderman: Hervé Roy and Gerard Salesses arranged the majority of the recordings that I have made over the last 35 years. Both of them, with their personalities and their respective talents, could write very clever combinations for the right and left hand, but I am only an artist and even when I add a few lines here and there, the essentials were done by the arrangers who knew how to write, not only for the piano, but also for all the other musicians who accompany me.

My producers, Paul de Senneville and Olivier Toussaint, are not only financial but also artistic producers. Without them and their colleagues at Delphine Productions and Delphine Editions, my career would never have developed as it has throughout the world. I, myself, have enough to do with concerts, TV appearances, musical recordings, travelling… so they concentrate on the compositions, the choice of repertoires, the marketing and all the necessary things; so much that 20 of their colleagues are busy full-time with selling my recordings, advertising, without forgetting to close the deals on concert contracts. Nothing could have happened if I were not surrounded by such a talented and dynamic team.

Dueblin: In an interview Jon Lord also mentioned that in the seventies, record companies took on a mentoring role for young musicians who were looking for new ways to play their music. What was your personal experience with this?

Richard Clayderman: The seventies were the golden years of rock, pop and variety music. Today potential music consumers are less concerned about the music than in consulting their smart-phones. I have profited from a wave that even today enables me to give concerts worldwide. I am a lucky man… a happy pianist.

Dueblin: Several talented young musicians were not as lucky as you. Some died before they began to bloom. Chi Coltrane, the Queen of Rock, told me during her interview of the difficulties young talents have with the recording companies, managers and/or drugs and alcohol. What advice would you give to young people who are strive for a career in music?

Richard Clayderman: There are thousands of musicians in the world, who are excellent musicians… but the public expects more than just this type of excellence. They are sensitive to that which brings out particular emotions in them: whether happy or sad. I am lucky to play compositions that fit with my style, my personality and my taste and that can seduce many people. The only advice I can give to a beginner is to find a style, an approach that till now no one else has been able to offer.

Dueblin: Mr. Clayderman, what projects would you like to realise in the coming years that did not have time for in the last 3 decades?

Richard Clayderman: Neither my producers nor I have concrete, long-term plans. We let things come to us, and when they are here, we do our best to see them through. An example is my new album, „Romantique“. Decca London contacted us one and a half years ago. They wanted to bring out a new album of mine. We carried out the project with great care and joy. It is a beautiful album, that is making its sweet way around the world. I am always open for new projects, whether albums, TV shows or concerts with other artists.

Dueblin: Mr. Clayderman, I would like to thank you very much for this interview and for your time. I wish you and your family all the very best.